Works on the Augustinian church and priory in Valletta commenced in 1571 on the plans of the Maltese Architect Glormu Cassar, the engineer of the Order of St. John who built St. John’s Cathedral, the Grand Masters Palace the Sacra Infirmeria, the seven Auberges and other fine buildings. It was first dedicated to Our Lady of Perpetual Help, although the priory that bore the title of Saint Augustine of Hippo.  From the latest archaeological discoveries (2016), the church foundations and segments of the old priory was in the Romanesque style with characteristic Melitan mouldings, rib vaulting, pointed arches and 16th century decorative adaptations. The church had its facade on St.Sebastian Street, (now Old Mint Street). The complex seems to have been level with this street and had a wide and high nave and apse. The cloister and priory were interconnected via a loggia.

In 1763, after nearly two hundred years, the Augustinian Community agreed that it was better to demolish the old church and to build a newer one, following the earthquake of 1693. The work was assigned to the Capo Maestro del Opera, Luqa Giuseppe Bonnici (1707—1779). He was replaced after Bonnici's death by Capo Maestro and Arcitetto Antonio Cachia (1739-1813), known for his earlier work on the Auberge de Castille under Andrea Belli. Bonnici’s plans were changed due to two large defects. Financial difficulties protracted works and the church was completed in 1794. On a Greek cross plan the church is characteristic of local Baroque with a crypt set as a foundation exploiting the heavy gradient. The plan of the complex is completely inverted with the facade of the church onto Old Bakery Street and the convent occupying the section over Old Mint Street. Few changes were made to the plan and it was rebuilt after WWII enemy attack damaged the church and the convent. On February 1, 1968, the church of Saint Augustine was elevated to a parish by Mons. Sir Michael Gonzi, Archbishop of Malta. 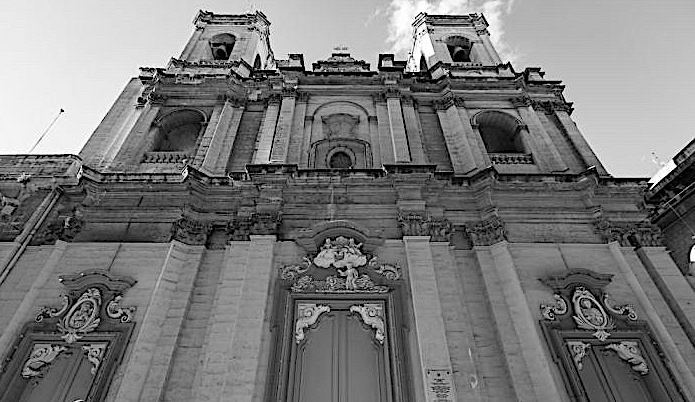